Day 2 in HCMC started real early – Was woken up before I was ready to leave my bed at 6.30am because everyone was meeting for breakfast at 7am!

Seriously……. too early. We got back rather late the night before after the dodgiest massage experience of my life (according to YZ: their skirts were shorter than his underwear!) and I was just deadbeat 😵

Of course, nothing better than a sugar rush to start the day. Super sweet Vietnamese coffee to the rescue! 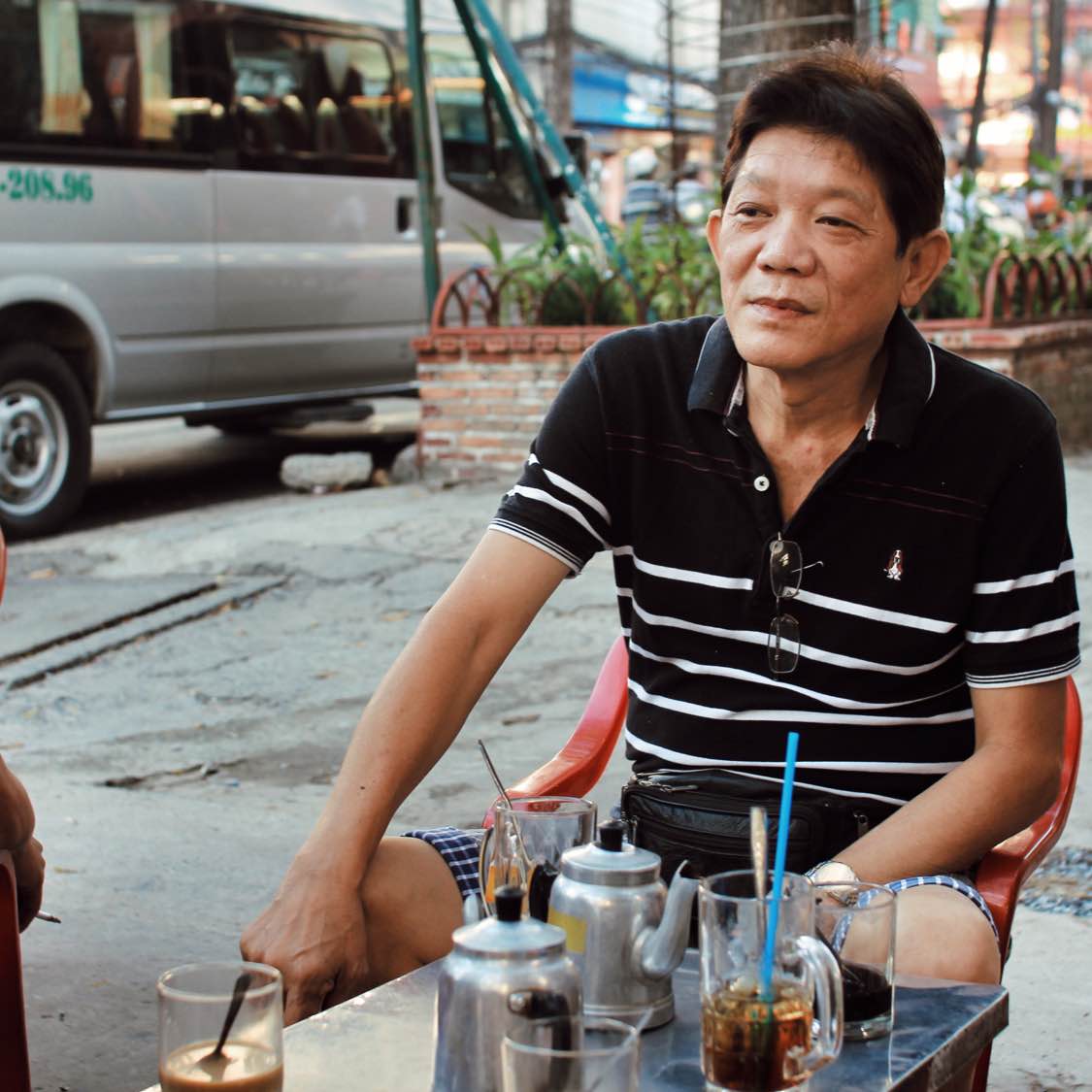 Just sitting by the roadside drinking coffee. It was rather nice actually until the traffic started and all the honks went off non-stop. If you thought that Bangkok was bad… HCM is a whole new level of traffic. The scooters zoom all over the roads in swarms with no regard for traffic rules or lights and crossing the road is probably more exciting than sitting on a roller coaster. 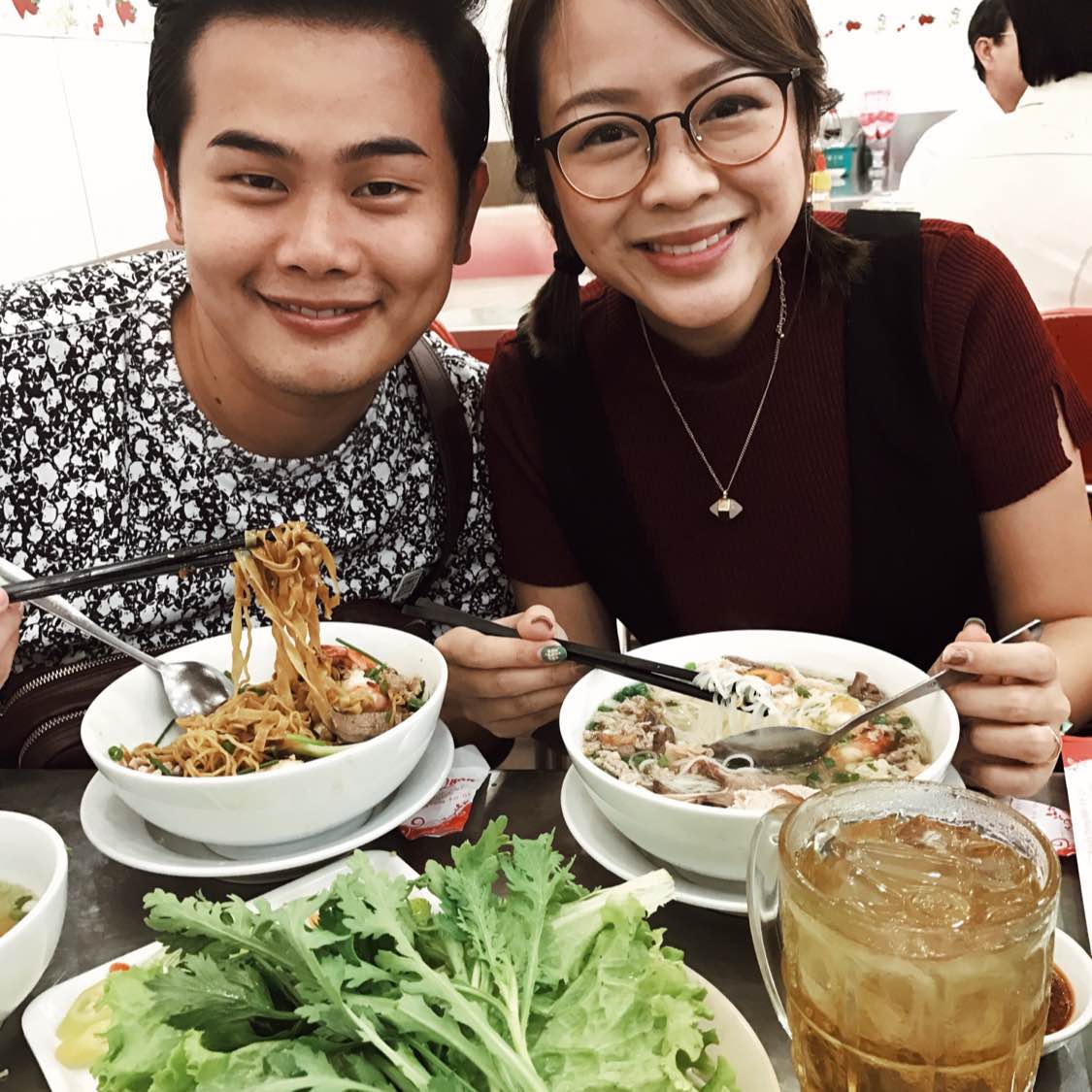 We then headed off for breakfast, which was none other than bowls of hearty, tasty pho!

I wanted beef pho but this place sells something that's closer to ba chor mee. There's minced pork, liver, pork slices and prawns in this pho and it comes in soup or dry version!

I REALLY enjoyed my soup pho! Best ever first thing in the morning!

The soup was a tad sweet but well-balanced with a flavourful taste, and the pho noodles were soft and chewy!

Here's an idea of what traffic looks like in the city. There are tons of scooters all vigorously honking on the roads every few seconds, I swear! 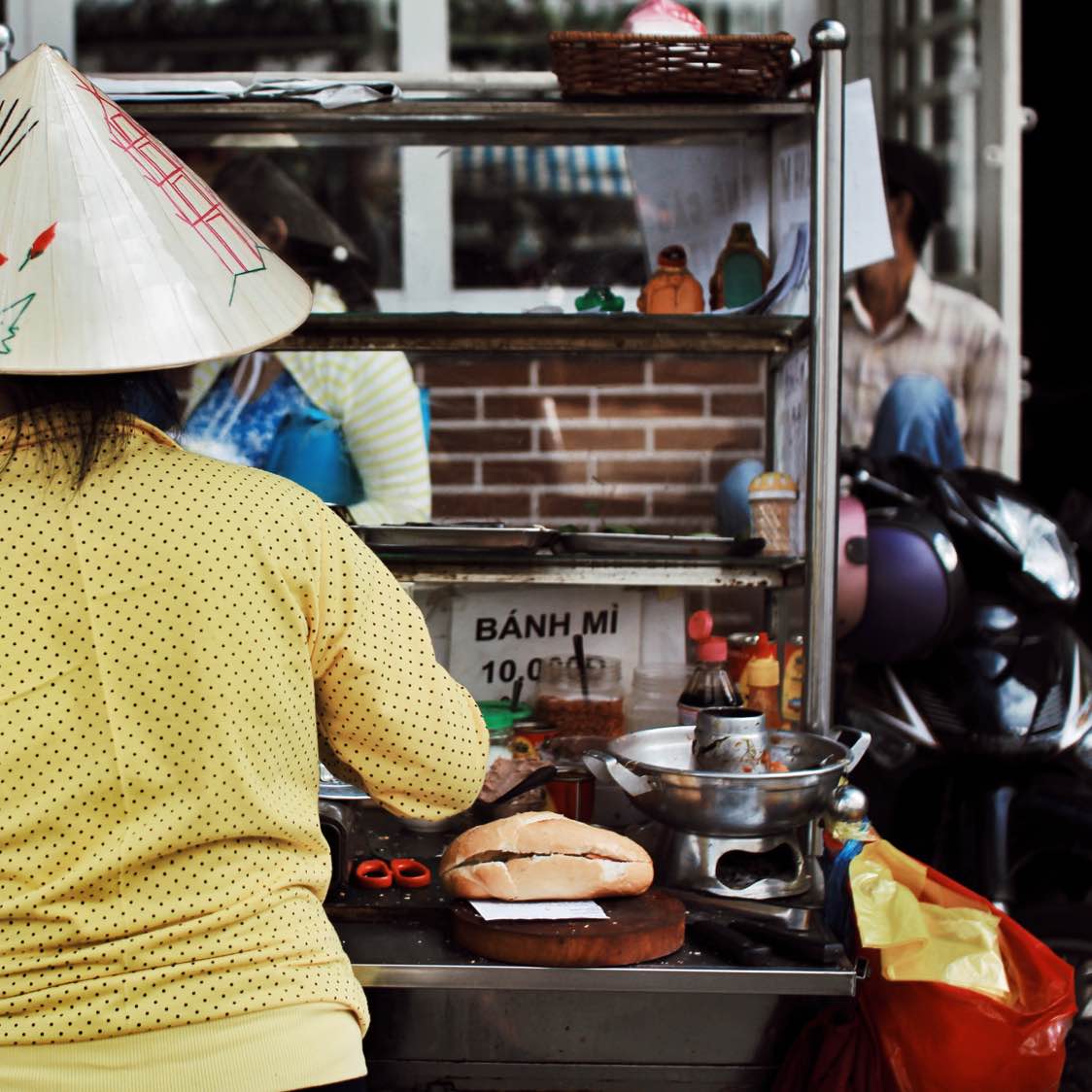 We walked around for a bit after breakfast, and I did my favourite thing to do – just taking in the sights and sounds and getting shutter happy!

We tried Banh Mi for the first time yesterday and I liked it! The baguette is so crispy and fluffy, it was really very yummy 😋 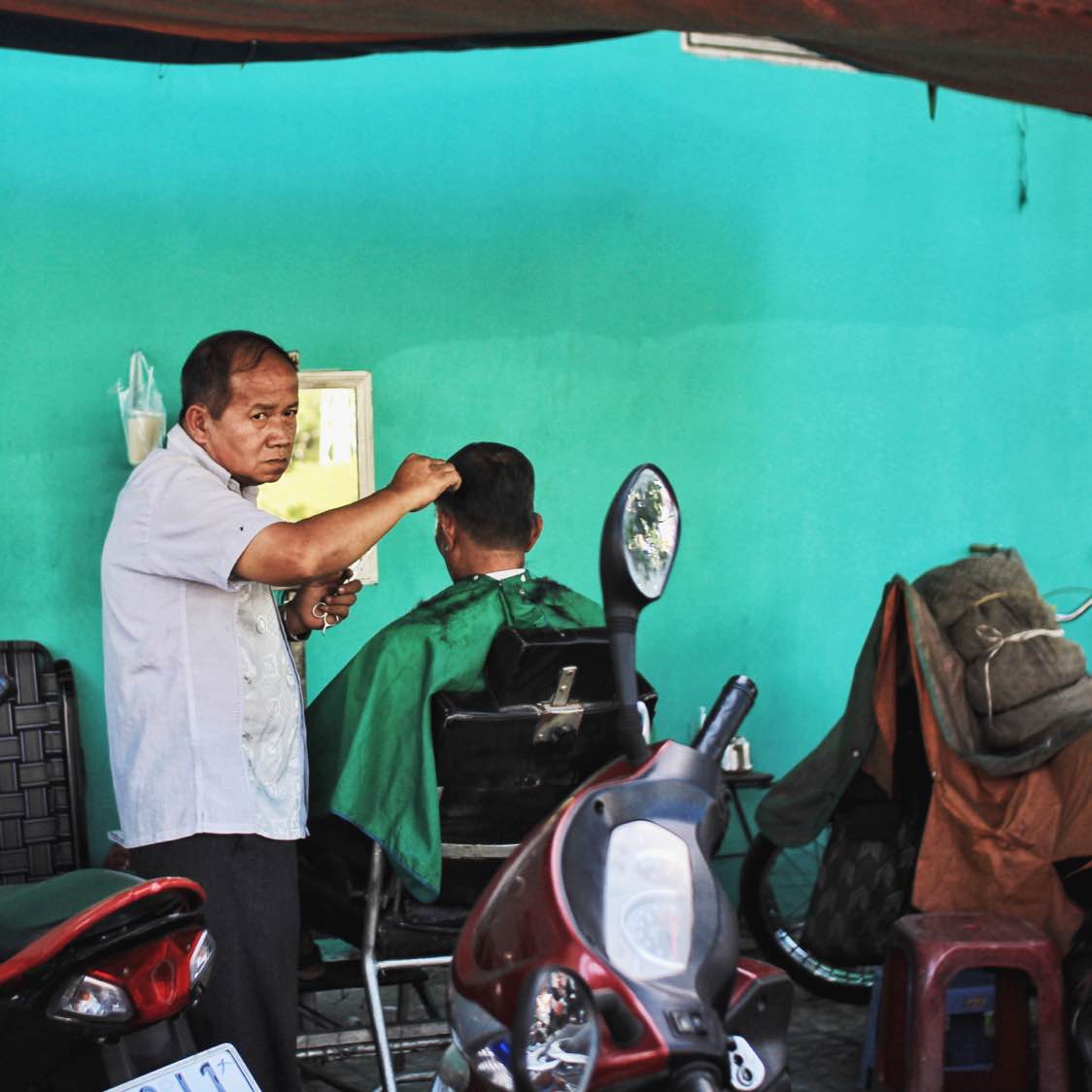 Street side barber – A dying trade in Singapore. I've only ever seen them around a couple of times in the back alleys of Singapore in recent years, but they're quite the common thing in HCM.

The barber's friend noticed me snapping away with my camera and called out to him, resulting in the barber looking over to me with a somewhat bemused expression.

That cone-shaped hat is legit iconic of Vietnam. This particular street food vendor was selling mostly bananas (which had been steamed, apparently) as well as pickled olives. We bought a bunch of bananas to try, but I'm guessing they're an acquired taste or meant to be eaten in another way because both my mum and YZ said the bananas were tasteless and not all that palatable 😂

Along another street, there were tubs and tubs of live fish for sale! You could pick out the fish you wanted with a little net and scoop them up into a small bowl. I also saw tiny terrapins paddling about in one of the tubs. 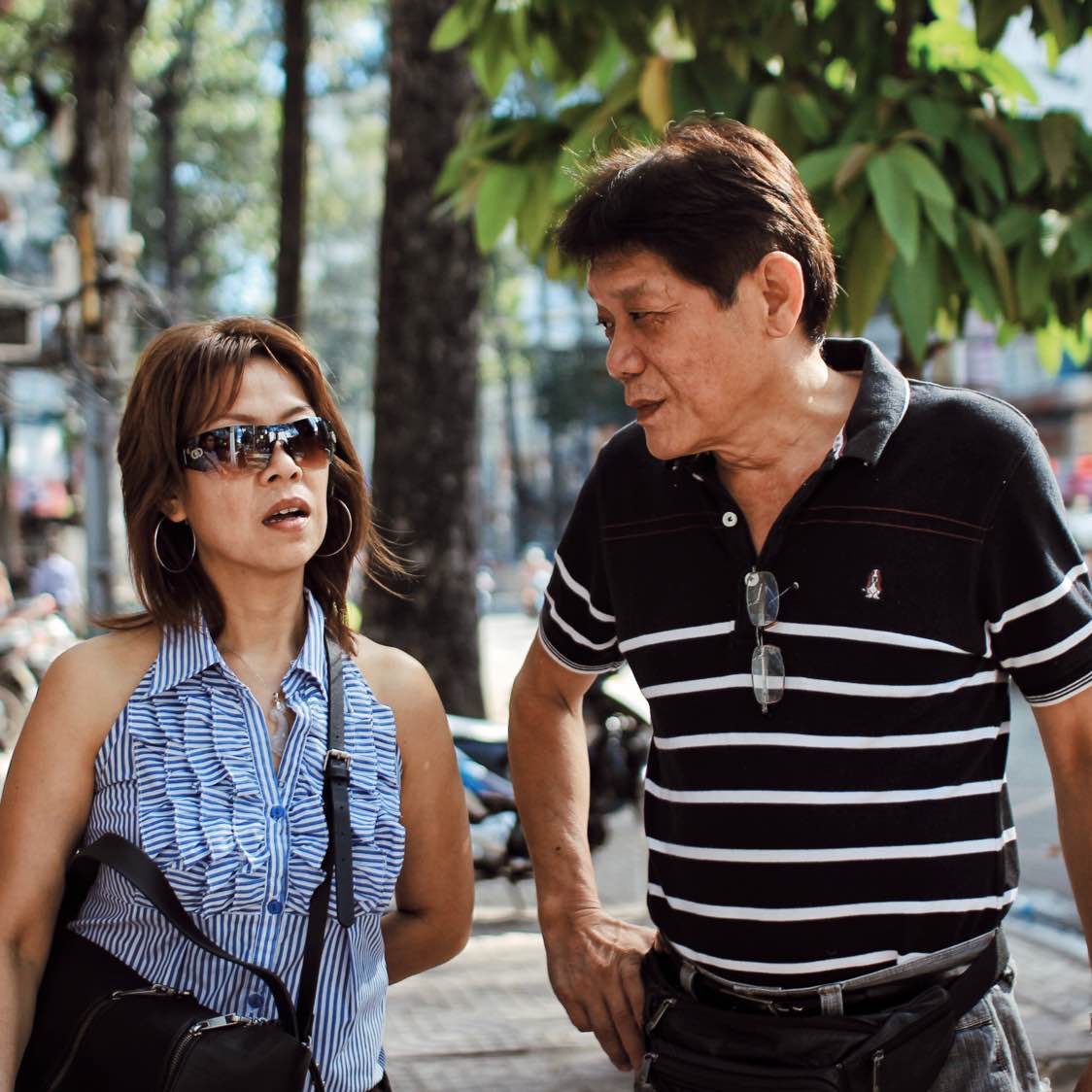 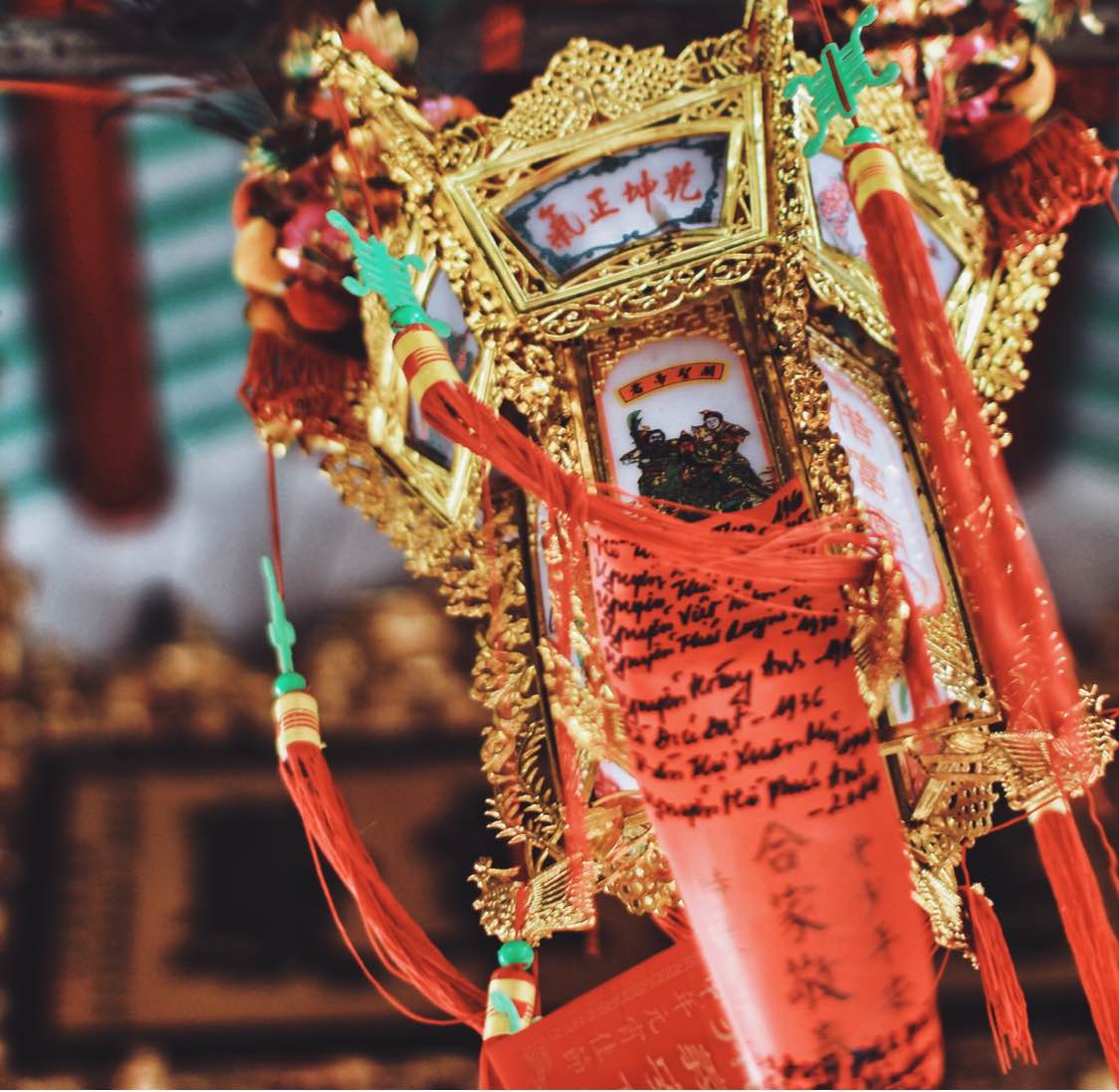 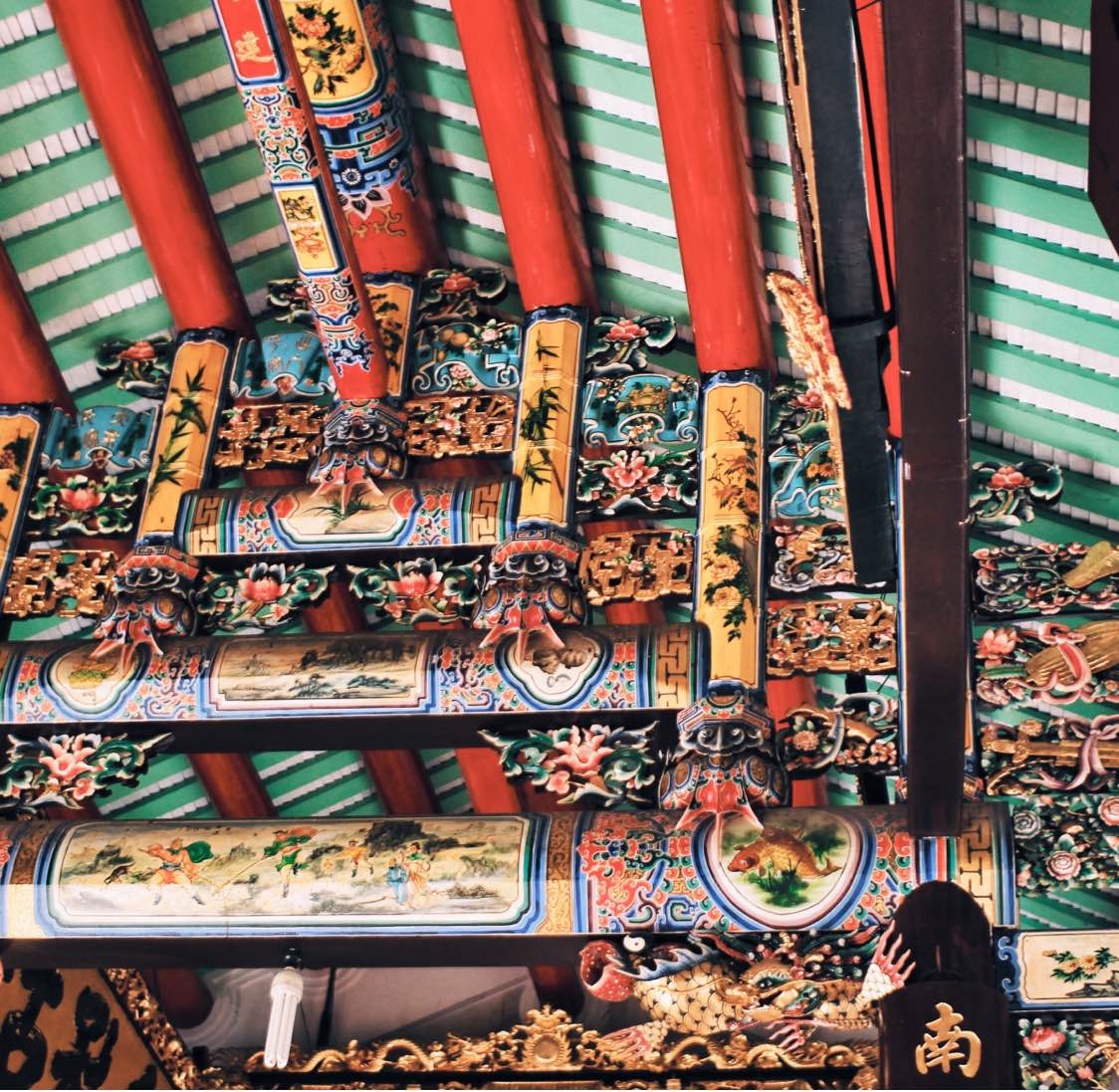 There's a huge Chinese population in Vietnam too and many locals can speak a smattering of mandarin, Cantonese and some even Teochew, surprisingly. 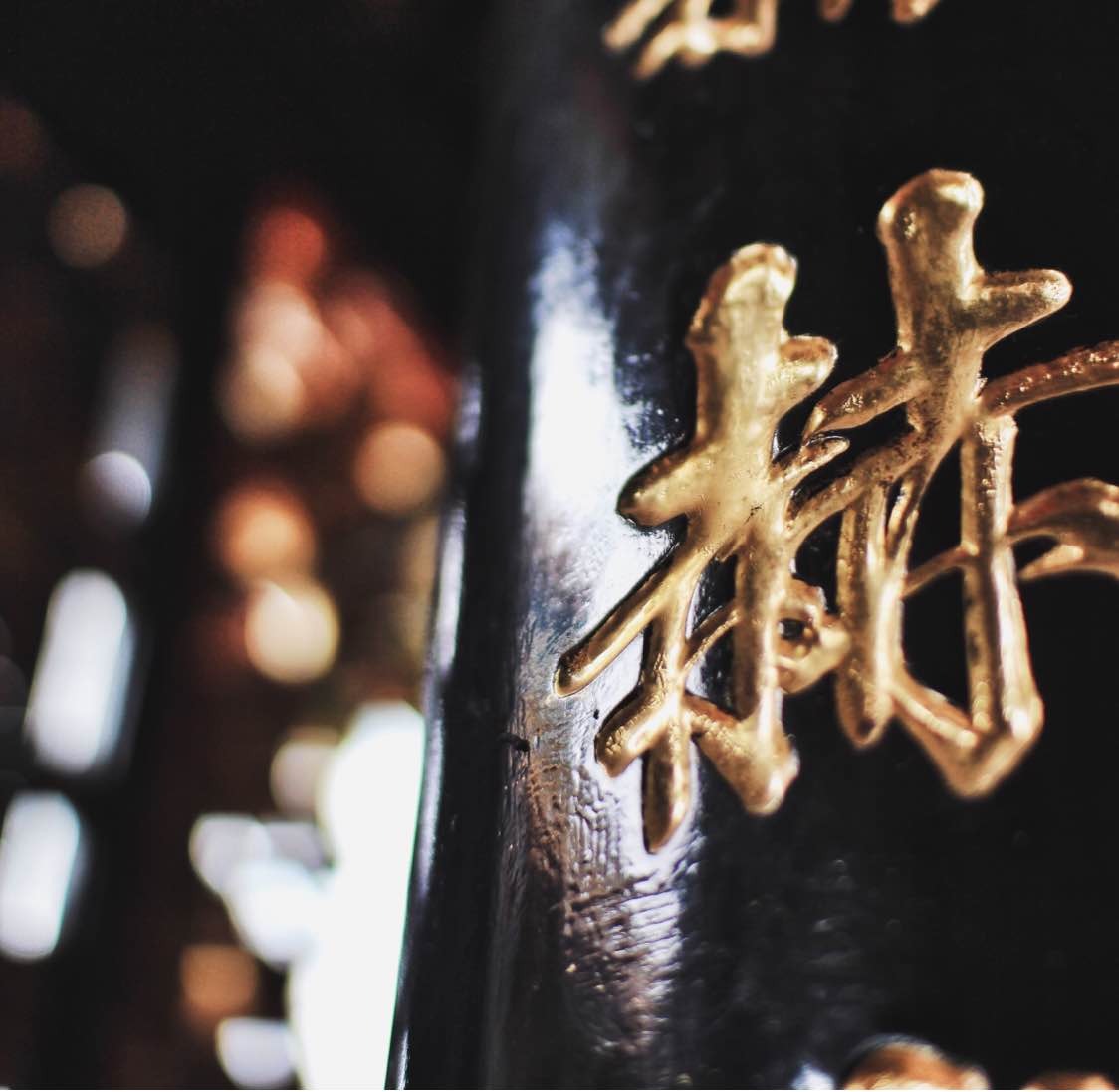 It started raining earnestly in the middle of the afternoon. Those white specks you see are actually rain drops.

I've always been strangely fascinated with these incense coils that hang above from the temple ceiling. 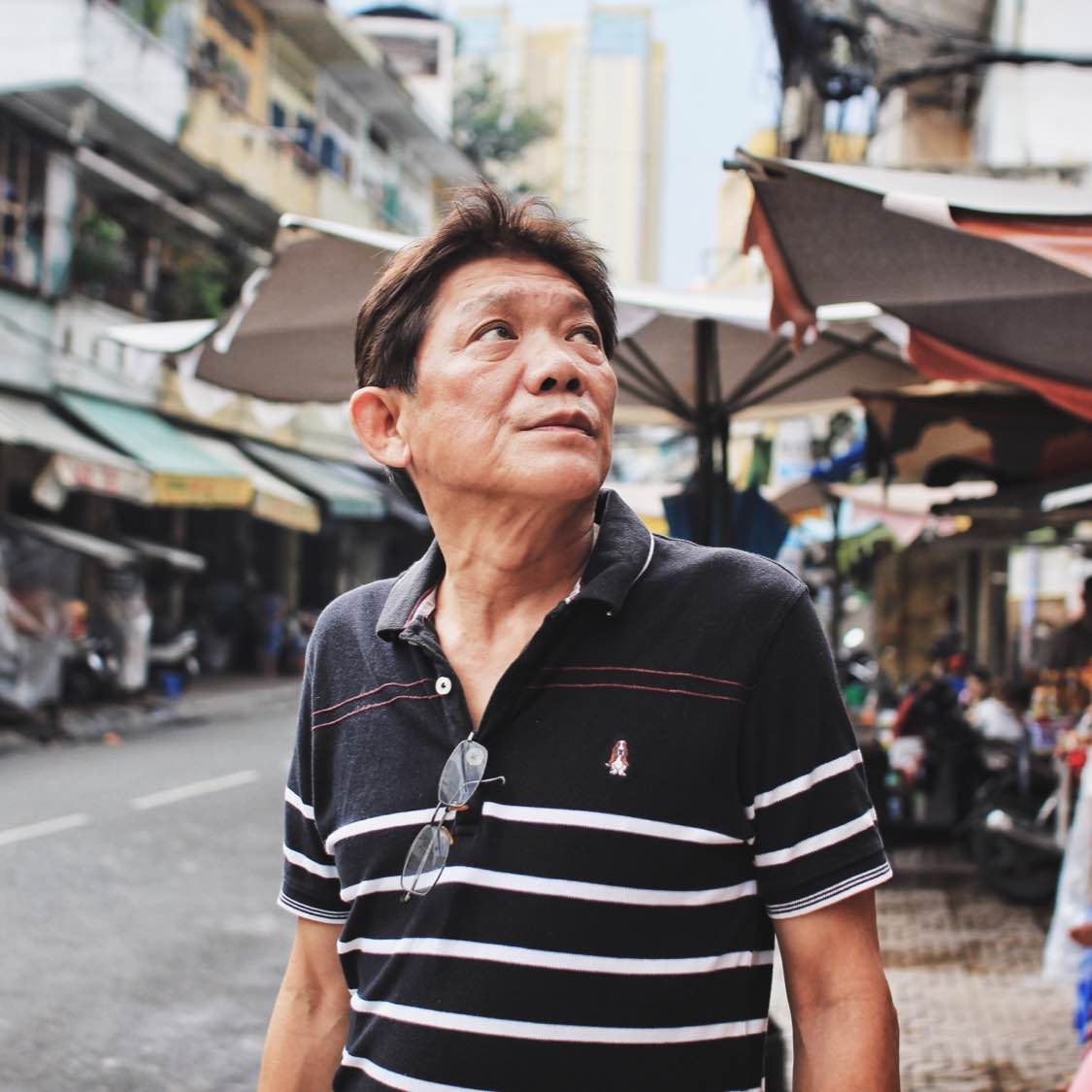 Papa Goh and his swag 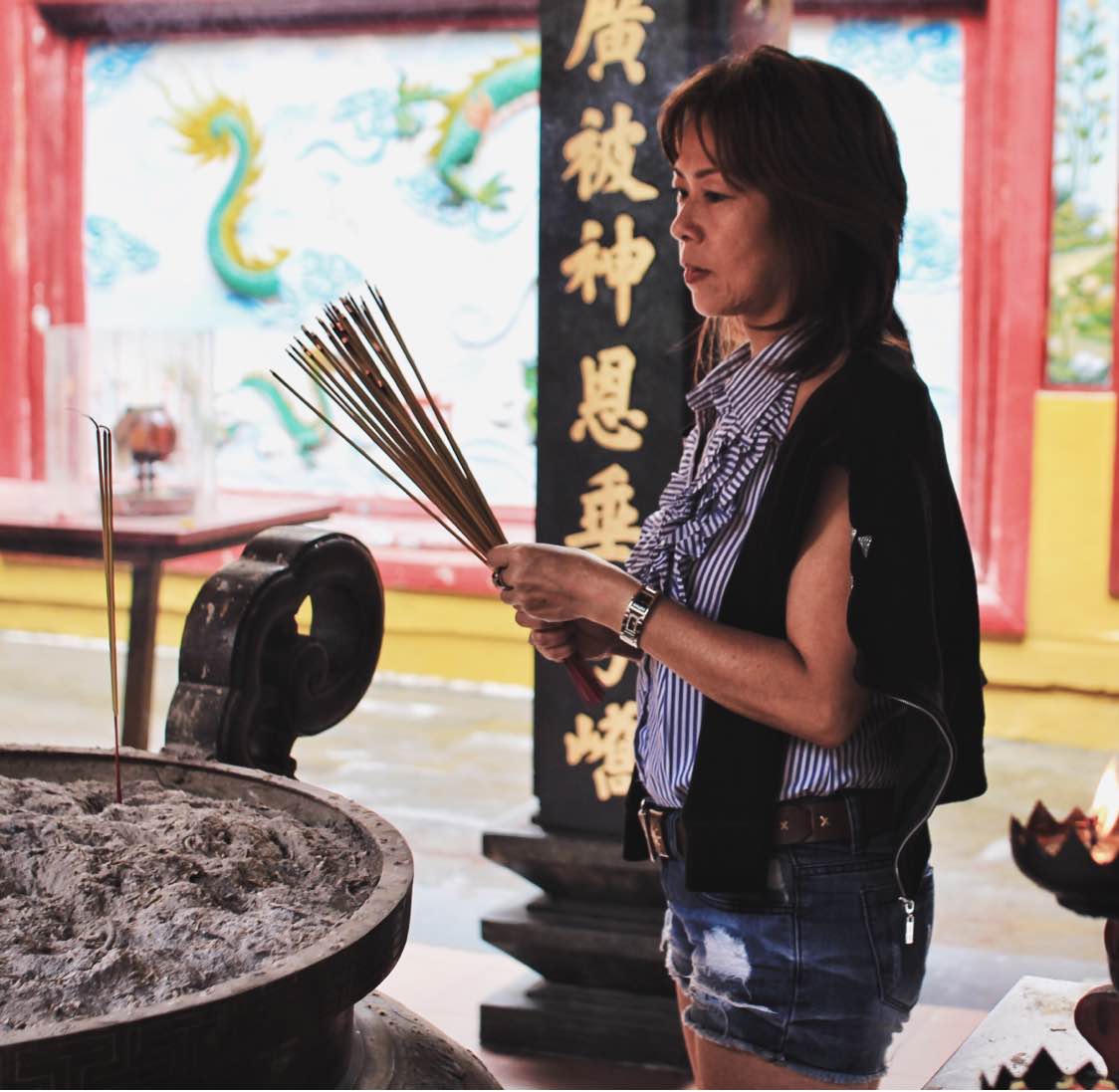 Mama making her rounds in the temple.