I'm still trying to get used to the look of bangs on me right now.. Every day (or maybe every other minute cos I keep re-arranging it) it looks different hahaha and I'm not sure if that's a good or bad thing 😑

Well, it's just hair and a fringe after all! If I get tired of it again, I'll just grow it out and all will be well again.

YZ says he doesn't like straight bangs on me and prefers it side-swept! 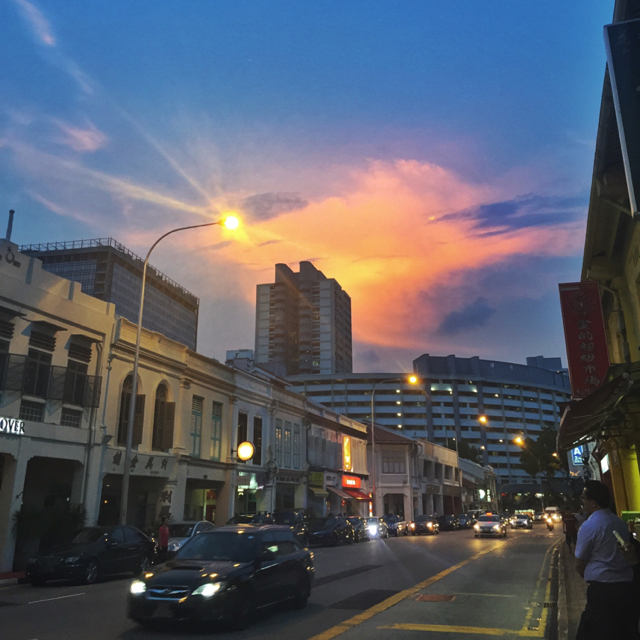 And a random shot of today's sunset.

The weather is really unbearably hot but it's times like this that you get the most beautiful skies. The irony 😣

What a busy day today at GK and then rehearsal 💦 And GK had a special filming for a segment on TV!

Don't have me talking but have me kelafare-ing.

And because it was a channel 8 segment, I added so many new Chinese words to my vocabulary today! So I shall share them with you, just for interest's sake.

Firstly… What is "app" in Chinese?

Actually, in China, they call it "A-P-P", or "Eh-Pi-Pi" cuz it's a literal spelling for the English word, but in Chinese, "App" is actually..

Bet you didn't know that cos I definitely didn't 😂

I was guessing that the Chinese transition would be "低潮时期" or something LOL taking it very literally, but it is in fact..

Another interesting vocab is the phrase used to describe customer flow/traffic. Can you guess what it is? I wouldn't have known it, but the proper term is..

Bet you also didn't know that a "smart phone" (like iPhone, android, any phone that runs on a sophisticated software) is also known as..

Now I feel quite guilty that my 中文水准 is so poor. Actually, English has always been my stronger language but I think I speak mandarin quite fluently too. I even used to be in 高级华文 in Primary and Secondary school but regularly scored lowest in class for that hahahaha 😑

My parents speak mandarin to me but only very conversational level mandarin. My spoken mandarin improved after I took 艺人训练班 with 沸辉老师 when I was 19 years old.

老师 made us memorize names of Singapore buildings and MRT stations in Chinese. 😳 And also "读稿", read Chinese articles and present in Chinese in front of a video camera.

I hope that my kid(s) in future will be able to speak mandarin fluently! It is such a pity to see the younger generation nowadays have such poor command of mandarin, myself included.

Taxi uncle just said he thought I was Thai and asked if anyone else has said the same to me before.

I usually get "you don't look local" but not typically Thai leh…… 像meh?