Yes, I ain't giving up on the travelogue!!!

Sorry, been so busy the past week that I didn't finish my narration! So I'm back and gonna try to power through the remaining 3 days!

Though by day 6, we were pretty much doing way more shopping than sight-seeing, and yeappp we were back at Shibuya again! Shibuya has got soooo many things cannot shop finish one 😱 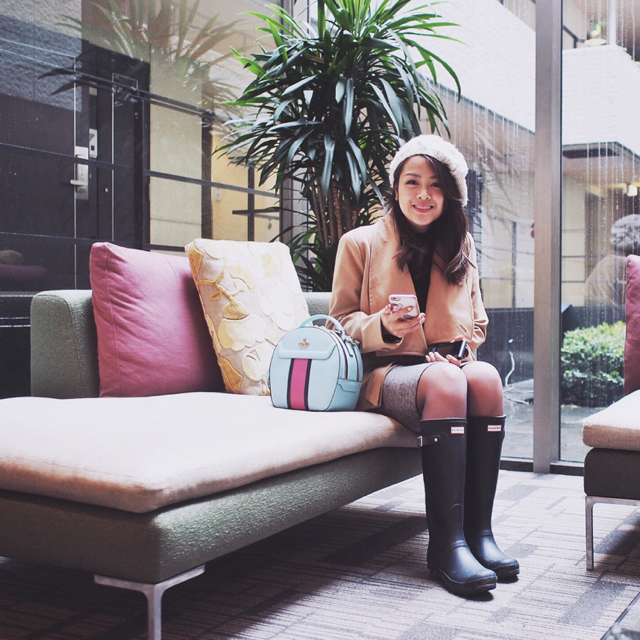 Also left our really nice apartment at Hatagaya for our next Roomorama apartment, at Meguro!

Really #livelikealocal man cos I've never even heard of these two places in Japan before I stayed there. Which is pretty cool!!!

Photo here taken at the lobby of our Hatagaya apartment which was such a pleasure to stay at. Good bye awesome apartment!

But before we checked out in the afternoon, the three of us woke up REAL early.. Like 7am? Very early cos slept at 4am or something you know?

To visit the famous Tsukiji Fish Market in the morning!!!

The skies were rather gloomy when we left the apartment, but it didn't start raining in earnest until we reached Tsukiji train station!

But we braved the rain with no brollies (thankful for my beanie that kept my head dry at least) and that's why I said in my previous entry that my hair became flatter than cabbage FML. All that rain!!!

Here's what the train stations look like at 8.48am in the morning. It's crazy rush hour!! 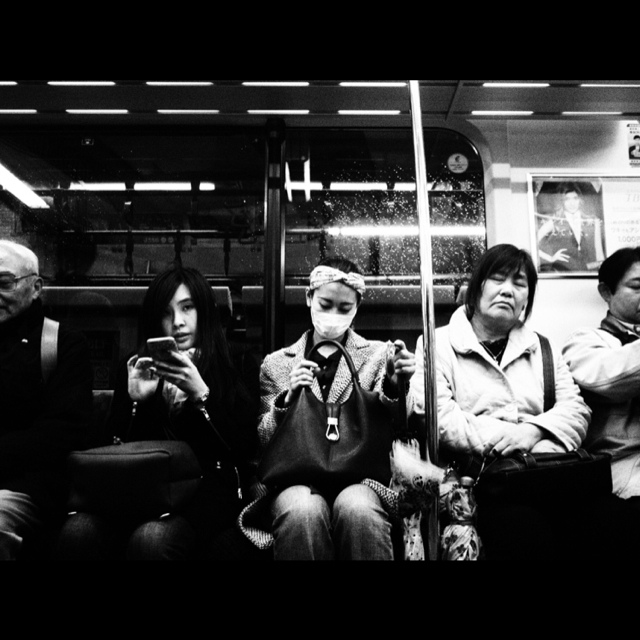 Taken with the art filter mode on my Oly EPL5 btw!

My favourite filter on the camera and it makes for really nice B/W mood shots.

I've visited the fish auctions years ago and this time round, we were just there for a purpose, to walk the markets and eat as much yummy food as possible!

Despite the rainy weather, it was still relatively crowded with quite a lot of tourists and locals alike!

There are rows and rows of food stalls and other kinds of shops selling everything from sashimi to dried goods and souvenirs. 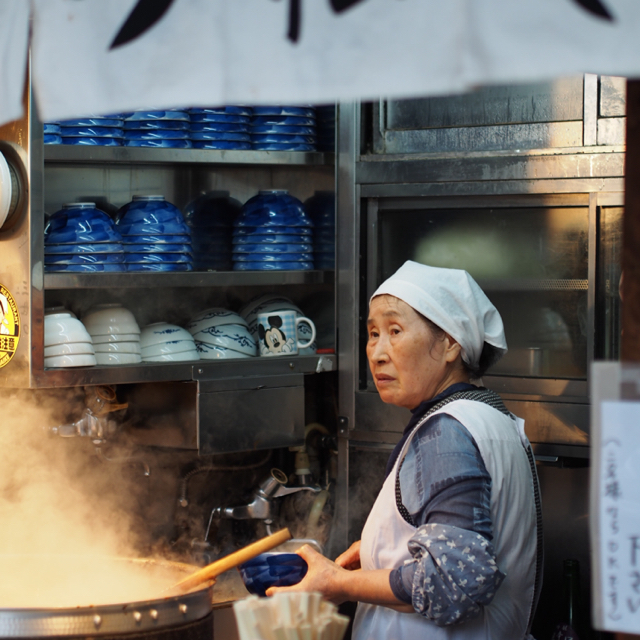 So the first stall we headed for was THIS AMAZING BEEF STEW STALL. Which you musttttt try. It's like Yoshinoya beef stew but homemade and better!!! 😱

But be warned.. It is run by a very grumpy obasan who will stare you down and does not allow photo-taking. Nonetheless, I managed to get a few shots just try not to be too obvious about it 🙊 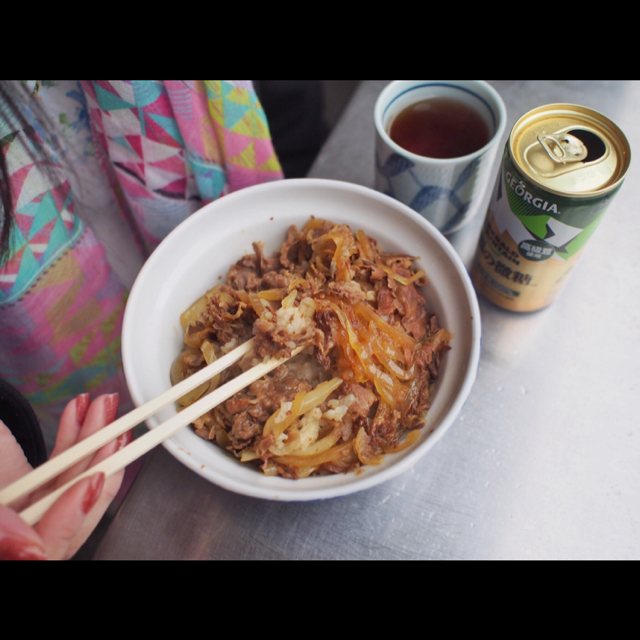 The story behind this beef stew is that the first time @trishaliang was at Tsukiji, she walked past it and smelt its incredible aroma but regretfully she was so full from having eaten other stuff she didn't get to try it. Second time she went, it was closed, and this is the third time lucky: shop open, aroma wafting by us, very hungry stomachs!!!

We ordered ONE bowl to share between Trish and I cos Evonne didn't want to have it. But it was SOoooOoooo good!

The caramelised onions were soooooo soft and sweet. The beef meat was made of two different kinds (brisket and the regular beef meat) and was very tender. The gravy was so fragrant too!!! On top of the liap liap rice.

Maybe I'm exaggerating but it really tasted like the best thing on earth on cold wet Japanese morning!

What a great start to the day 😋

Cute sushi erasers that we were squealing over (Aiyoooo soooo cuteeeee!)

But didn't buy. I think they were quite overpriced at the market, which is after all very much of a tourist attraction!

There's so much to eat at the market that you're gonna be spoilt for choice!

Unfortunately though, both @trishaliang and @evonnz are not fans of sashimi, same as me (I only eat salmon and scallop sashimi) so we didn't try any of the sashimi at the market. It's supposed to be super duper fresh!!

The next thing we went straight for were the tamago stalls! 😋 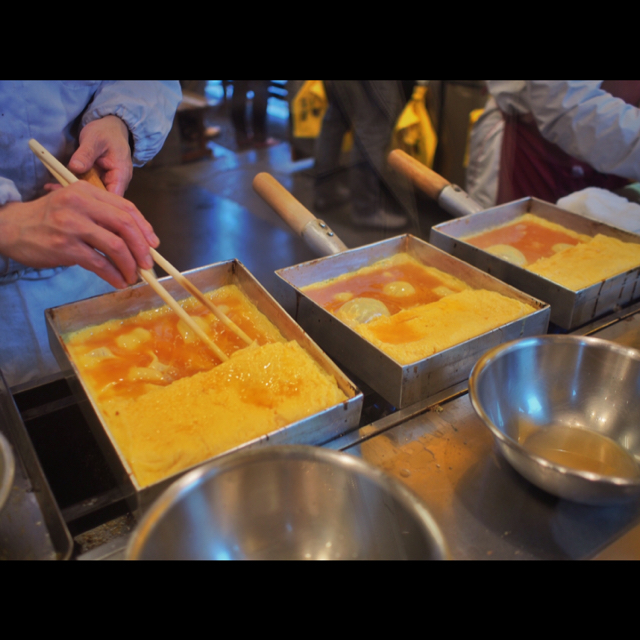 Tamago in the making.. Super amazing!!

You'll never see such tamago in Singapore. It's soooo thick and tasty!!!

I was busy snapchatting the entire tamago-making process down and it was really incredible! Never knew that tamago were cooked this way: no wonder tamago has all those nice layers in it!

Wish I could have some of this right now! 😍

Love food hunts man. And the final destination for us was this grilled seafood stall for some grilled hotate and king crab legs! 😍😍😍

Extremely enthusiastic shopkeepers lollll I love how animated they are! 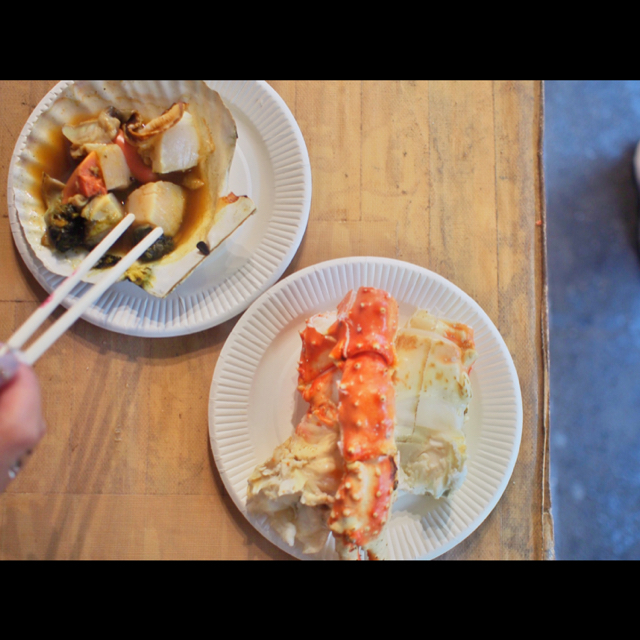 It was quite good but I wouldn't say it was mind-blowing. Maybe there are better stalls around Tsukiji?

Bad quality photo but it will do. Three happy faces after a very fulfilling food excursion!

After which we went back to our apartment and looked like this for the next 1-2 hours before we dragged ourselves up to check out and to make the move to our next apartment at Meguro!

At our new apartment!

We decided to take a taxi there cos the weather was too wet plus we had F O U R luggages for three pax.

Actually I remember by this time all of us were like "WHY DOES OUR LUGGAGE FEEL HEAVIER 😭" probably bcos we were already tired and aching from the past few days of luggage lugging and also the other two girls had countless new additions to their luggages (washi tapes and other stuff) by then.

The new apartment at Meguro is a short distance away from the train station, and we hopped on the local bus to make our way to Meguro Station.

Meguro station itself is only two stops away from Shibuya so it was actually a rather convenient location too!

Took the train to Shibuya and we ended up at one of @trishaliang and @evonnz's favourite.. TOKYU HANDS!!! 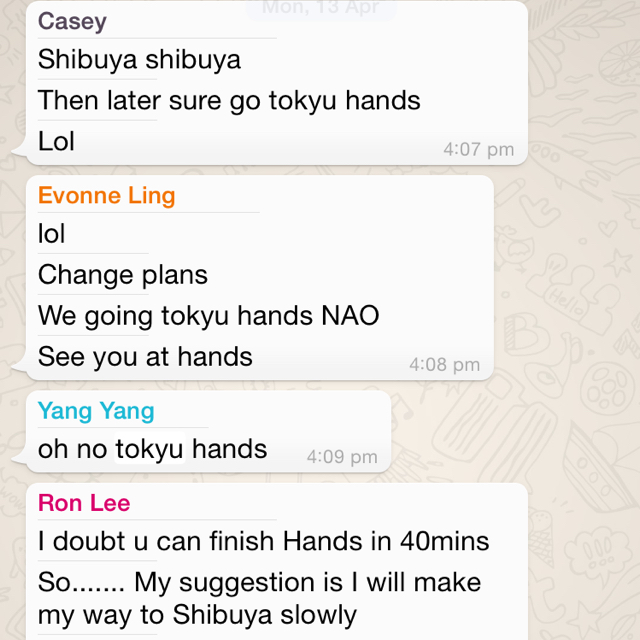 So we have this group chat with all our partners.. AND @ronineel, called Japan Spotcheck LOL.

And when we told the guys we're going to Shibuya, you can just tell how well all the men know their partners hahahaa 🙊🙊🙊 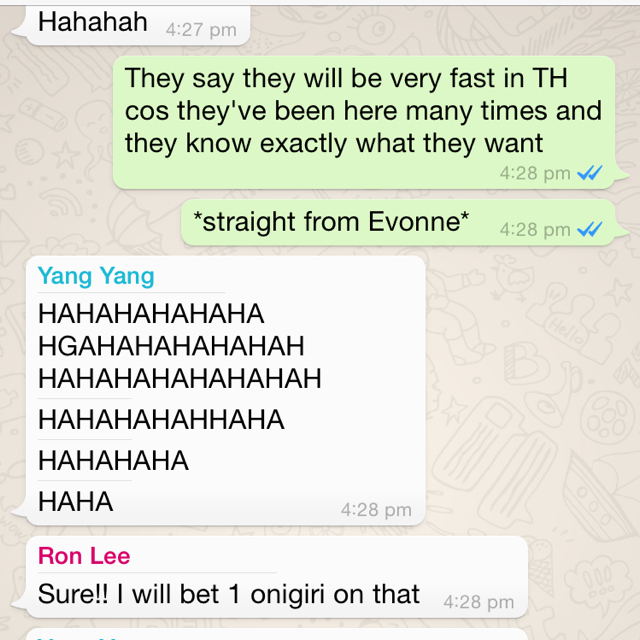 My two gfs confidently told the men (and I) that "TOKYU HANDS BEFORE DINNER IN FORTY FIVE MINS, NO PROBLEM!!!!"

And the response from @kenshinjeff…….

Think he nearly died from laughing. 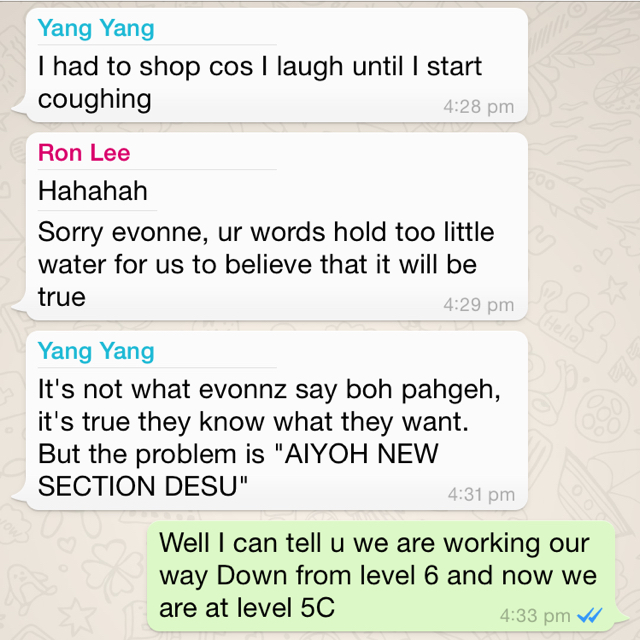 They got it right lolol

ON TO THE IMPORTANT PART.

So while the two were going gaga over stationary and I don't know what else, I was also busy checking out… This!!!

(Tokyu Hands has everything!"

Or in Japenglish, it's a "Roll Brush Iron"

Background story:
We had the tv on the previous night when we saw this incrediballs commercial that showed a hair stylist using this miraculous tool to style and curl hair so effortlessly! And I was like WAH I NEED THIS!

And tadaaa we found it in Tokyu Hands! Along with another ceramic heat rollers set that @evonnz bought cuz the hair salon used it on her and we were mega impressed.

We even took a screenshot of the commercial hahaha 🙊

Wanted to get the black one we saw in the CM.. But the voltage was meant for Japan only!

*Important tip when buying gadgets from Japan. Their voltage for local products is like only 100V, lower than Singapore's 220/240V!*

If you have equipment that runs on a lower/higher voltage, you should not connect it to Singaporean power unless you have the correct transformer (voltage adaptor)!!

It's the travel friendly version which is smaller, lighter, and foldable! Comes in a nice pink too and has a travel pouch to go along with it. Plus voltage is okay from 100-220V.
#TAKEMYMONEY

After 5% coupon at Tokyu Hands plus tax free, it cost me like 90SGD? GOOD BUY!

(Read on to the end of the post to see how this Roll Brush Iron fared!)

Finally after we were all done at Tokyu Hands (yes yes took longer than 45 mins).. It was time for dinner!

So glad I can save all the snapchat snippets!! Some things cannot describe in photos one.

Like many other Japanese casual dining establishments, you make payment and buy your food ticket from a machine, before you enter the restaurant!

Ichiran Ramen only serves one kind of ramen, but you can customize it with different options! Like how hard you want the noodles to be, how thick the broth is, etc..

When seats are available, you'll be led to a booth within the restaurant, where is a retractable window in front of you which all you see are the staff’s hands.

There's a hidden partition behind that window where there's a serving area for the staff to attend to you!

The long dining counter is separated into booths by movable panels which you can fold away if you are sitting with a friend! If not you will be literally "面壁思过*" during your meal haha

Hand your food tickets to the staff who will then take your order, have it prepares in the kitchen, and JUST LIKE MAGIC✨ a bowl of ramen will appear right in front of your eyes!!!

Gosh I wish I could have a bowl of hot piping ramen.. Right now 😍

Taste-wise, I thought the ramen was pretty good!! Should have chosen the "hardest" consistency of ramen though cos by the time I was done take photos of it it was quite soft already.

But it was so comforting and tasty in the cold weather!

Happy me with my bowl of ramen. The portion is rather generous and I was so full by the time I got to the bottom of my bowl!

It was a very satisfying dinner!

After dinner, @evonnz wanted to check out Onitsuka Tiger so @trishaliang and I walked randomly into a departmental store.

Who would have known that we left the place 1h later with bags of purchases! 😨

Just when you least expect it. But the word SALE is irresistible lol.

First, @trishaliang spotted a brolly that was on sale! Rainbow print, on sale, BUY!

Then.. We were looking for the toilet and had to go down to a different floor.. Lo and behold, SHOE SALE 😱

This pair of wellies caught my eye immediately and after some quick calculations, realised that it's only about 90SGD!!!

I was in two minds since I already have one pair of Hunter wellies and they are navy too! But my Hunter ones are pretty worn by now (they've been travelling with me for a good one year I think) and this pair had HOT PINK SOLES 😍

Plus the fit was so pretty!!! Ok…… #TAKEMYMONEYAGAINJAPAN

Left the store very happy with THREE pairs of shoes for under $200 (the wellies, a pair of white plimsolls which someone stepped on today while I was on the train FML, and a pair of super chio pastel tweed Mary Jane heels) plus a pretty and light rainbow printed brolly.

Went back to the famous Shibuya Crossing for one more glimpse of the traffic crossing. Look at those umbrellas bobbing away!

Still amazed by how busy this crossing is at all times of the day!

We finally made our way back to Meguro and took the bus back home to our apartment. With so many bags in hand phew~~

First thing I did when we got back to the apartment was to try my brand new hair gadget! Hehehe

Pretty impressed I must say.

Though it didn't work as well on @evonnz I guess her hair is too stubborn for this!

And finally the end of another long but satisfying day 🙊🙊🙊

Last two days of Japan will carry on tomorrow!!! 😴