Today was a huge privilege for me.. And I've been bursting to share the news but I couldn't do so until now (that it's over)!

I still can't believe it, but we (SYC Ensemble Singers) were invited to sing for Mr Lee's wake. 😳

It was extremely last minute: we were only informed like a day before, and then had it rescheduled again to the next day.. Because of that I cancelled my plans for two whole days. But I knew 100% that I wanted to be part of this for certain.

Having the privilege to sing for such a momentous occasion that the entire nation is taking part in and that will only happen once in my lifetime, I felt really honored to be part of SYC Ensemble Singers, which in my opinion, is the closest thing to a national choir that we've got.

Did you know that SYC was formed just a year before Singapore's independence in 1965? And we turned 50 last year! SYC started as a combined schools choir and was called Singapore Youth Choir.

We were the first choir to represent singapore overseas and bring back accolades and awards too.

And bet you didn't know that the first few recordings of "Majulah Singapura" that you hear on TV and radio every morning at 6am was recorded by SYC as well.

The choir is entirely non-profit, but is run out of love and commitment and hard work. But every moment that I get the privilege to be involved in such monumental events like this makes me feel really really proud to be a singer in SYC. Being able to contribute to the nation in my own tiny way..

So after a very last-minute notification and activation, 24 of the choir members took leave from work, skipped a day of school and pushed aside other commitments to be able to make it for the performance for Mr Lee Kuan Yew.

Which I feel is a small price to pay to have such a huge privilege.

Apart from that, we also picked up new music scores especially for the song tribute and these songs were put together and rehearsed on the day of the performance in barely three hours.

This is just how professional the choir is, to stay so focused and bring three pieces to performance standards, and also the utmost importance of this 15 minute performance for us.

Imagine that almost all 3 pieces are totally brand new songs that the choir has never sang before or worked on. In just one morning to prepare before our performance at 3pm.

We reported at 10am today at Victoria Concert Hall to rehearse the songs, and man… It was already a cryfest the moment we started.

We've only ever sang once at the wake of a very renown Singaporean composer a couple of years ago, and to be honest, it is utterly heartbreaking and emotional to be singing at such a somber occasion.

This time round, it was much worse because several of us were already harboring so many sad feelings about the passing of Mr Lee.

The first song we worked on was "Home".

This is Home, truly
Where I know I must be
Where my dreams wait for me
Where that river always flows
This is home, surely
As my senses tell me
This is where I won't be alone
For this is where I know it's home

I'll share a tiny snippet of "Home" from our rehearsal just for you all. Trust me, that poignant pause between "This is home," "truly", "where I know I must be"… Killed me so bad.

By the time we finished singing "Home" once through, some of us were teary-eyed already…

After "Home", I think half of us looked and felt like this. So sad to think about a Singapore with no more LKY!

We made it through another two pieces: "Singapura", which is a familiar and comforting tune, as well as our personal favourite piece "If The Day Is Done". Which is another utterly beautiful and sad piece that sounds so melancholic and heartbreaking. 😣

At 1.30, we left to be brought to a holding area to be on standby for our performance. Although our time slot was about 3.45pm, we were prepared & waiting nearby at 2pm already.

The queue was still insanely long and today's weather was so so so hot too! Just standing in a corner observing the lovely Singaporeans coming from all walks of life.. Lots of older folks & just as many younger ones who all came to brave the long queues and relentless sun to pay their last respects to a beloved leader.

Observing the people in line/those leaving after having gone through Parliament House made me feel both happy and sad.

I was so happy to see everyone civilly and quietly waiting in the queue so patiently! And to see the extreme state of organization that was apparent everywhere. Also to see many heartwarming things.. Like free water for everyone, umbrellas for those who need some shelter from the sun, kind and helpful ground staff (army officers, staff and volunteers probably?) all around.

At the same time, I saw old folks hobbling out of Parliament House looking so grieved and sad 😭 Some in wheelchairs.. Some on walking sticks and some being supported by their family members. All these people spent hours and hours just for a few seconds of being there at the wake, and by the way you won't even be able to see Mr LKY from past the barricades cos the casket is put on a raised stand that's pretty high.

Singaporeans are not as un-altruistic and as pragmatic as believed! There are truly tens of thousands of Singaporeans who care and want to express their gratitude and appreciation. How heartening to see everyone come together and be united as one Singapore in the face of heartbreak and sorrow.

Rehearsing while waiting for our time slot.

We waited for around 1.5 hours too before we were allowed through the back gate of Parliament House, where we had to go through security checks and all too.

And then it was time for us to enter Parliament House.

The choir strode into the hall with composed steps and got ourselves into formation on the steps facing the casket and the moving throngs of people, took one bow for Mr LKY before we burst into song.

No photo-taking is allowed inside Parliament House so I can't tell you what the scene looked like, and of course we were there "on duty" so we could only be as professional as possible, without being distracted by the moving crowds of people as we sang.

But I could see everyone slowing down as they approached the casket, with many taking a deep bow when they reached the spot in front of the casket, and some even bowing three times.

As we sang, I hoped to be able to bring the beautiful music to those present, as well as sing our best because it was a thank you to Mr LKY for the lifetime he dedicated to our nation.

And all the words were so heartfelt…. Truly, Singapore is a home that I'm so proud of. My voice was close to breaking on some notes, but I tried to keep myself composed and dry-eyed so that the music wouldn't be affected.

But being at the scene really does unleash a flood of emotions.

Again, I felt so touched and privileged to be given the opportunity to be involved in such a significant and solemn occasion for all Singaporeans, and to be honoring Mr LKY with our gift of music.

It ended in a short 15 minutes. Quite a few of us left with tears in our eyes when we finished our last song and exited the hall.

It really struck a chord in my heart! (No pun intended)

I heard a recording of the St John's choir from the UK who were in town & also paid their tribute to Mr LKY by singing a different arrangement of "Home" as well.

Their version was very technically perfect, but listening to it didn't make me feel touched or emotionally affected cos although they had pure and beautiful voices, the performance was devoid of feelings for the meaning of the song.

No one will understand and feel for the lyrics of "Home" better than a Singaporean.

Had to take a 2km walk back to VCH cos they didn't allow us to cut through the traffic flow and thus we took 20 minutes to get back to VCH, walking from Parliament House through North Bridge Road to Raffles Place/Boat Quay and then past Fullerton and finally reach VCH.

It was already physically exhausting for us in our high heels and uncomfortably thick uniforms to make that 20 minute walk, so I can only imagine how much worse it is to be queueing there for five hours.

Walked past a building with a huge banner dedicated to Mr LKY and so many flowers and tributes all around it.

A snippet of the last song we sang that brought many of us to tears. Also, that's just 1/10th of the queue you see in the video.. 👏

#thankyouLKY, for bringing the nation together even in your passing.

If the day is done,
if birds sing no more,
if the wind has flagged tired,
then draw the veil of darkness thick upon me,
even as thou hast wrapt the earth
with the coverlet of sleep
and tenderly closed the petals
of the drooping lotus at dusk.

From the traveller,
whose sack of provisions is empty
before the voyage is ended,
whose garment is torn and dustladen,
whose strength is exhausted,
remove shame and poverty,
and renew his life like a flower
under the cover of thy kindly night. 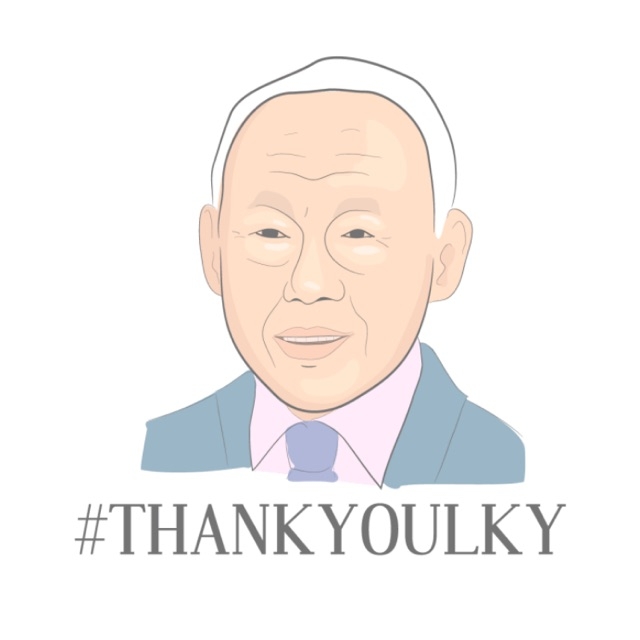 I was just thinking to myself earlier, how sweet would it be if Dayre had commemorative stickers especially for Mr LKY.. Lo and behold!!!!! 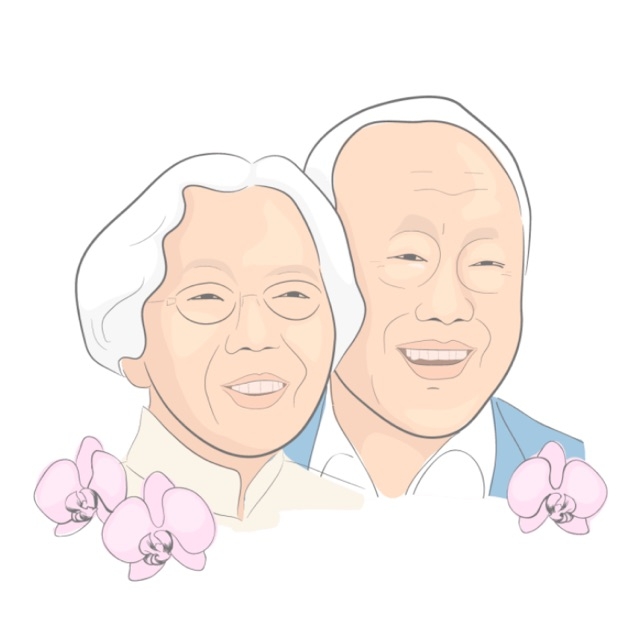 Love this one of Mr and Mrs Lee together. How I'd like to imagine the two of them right now, reunited in the afterlife.

Screencaptured from @leemathilda's Dayre post: I don't see these stickers showing up in my sticker store yet but iPhone is always lagging behind Android in app updates.

✨ Thanks Dayre team for the amazing stickers!