Carrying on part two of the story.

@evonnz and @trishaliang are the two who prodded YZ into getting the courage up to propose to me for real in August 2013, because they know the whole story, and were there for me through the bad period. Of course that time they were encouraging me to move on la LOL but many months afterwards they saw how YZ had made so much effort and treated me so much better in our relationship, and they thought it was high time he proposed to me.

Trish was working for Jann Paul (it's a diamond company) so she kept telling YZ to bring me down to see diamond rings. And we quarreled again about this cos YZ said "I'm not going to go and look at diamond rings just for fun. Only when you're ready for marriage then we'll talk about it".

I got so cheesed off I literally said it straight to his face: "IF I'M NOT READY, WHY WOULD I ASK YOU TO GO DOWN AND LOOK AT THE DIAMOND RINGS WITH ME?!" I know, it was my fault la. So yes. I told him straight:

I WANT TO MARRY YOU. Where got girlfriend tell boyfriend like that one wtf after a quarrel somemore?! 😒

Thus that man finally got it into his thick skull that yes, he's at long last gotten the confirmation that he'd been waiting for. And we went down to Jann Paul to look at rings together after that.

YZ was adamant about getting a ring that matched up to the specs of the previous one he got and sold off cos he said he didn't want to compromise on the ring, it being important to him, and we initially picked out another 1-carat diamond and started discussing setting customization with Jann Paul.

After which you know what happened: while we haven't yet confirmed on the ring customization and all that, he proposed to me with a fake diamond ring so as to surprise me! And it worked, cos I obviously thought he had to have the ring ready to propose to me.

I said YES even without a ring, which makes the ring seem rather pointless already, doesn't it 😂

The end of the story is, after accepting his proposal, I managed to persuade him to downsize the diamond so that it wouldn't be so bloody expensive for a useless rock. Lol.

After another big saga about prices and diamond specs.. (Too long to go into detail), we finally decided on a nice-sized diamond with customized setting from Jann Paul.

Price-wise, it's like almost 1/3 the price of a 1-carat diamond lor. So much cheaper. But I have skinny fingers, so I think it looks perfect on me!

The most positive thing I can say is, at least I got to choose my own ring setting cos I saw a photo of the first ring YZ bought (I did not ever see the real ring itself and I don't want to) and the setting is quite "orbit" (AKA old-fashioned) 🙊

And this ring that's on my finger right now means so much more than a huge rock. So so so much more.

In any case, diamonds can be upgraded so I'm giving him "room for improvement"! Ehehehe.

My mole is so distracting 😩 But YZ says it's ok, and it looks totally fine. In his words "This is what makes you unique mah."

And I am super pleased with how the customized filigree design setting turned out!

It didn't quite feel real, without the ring. Actually it still feels a bit strange now to be wearing a diamond ring. 🙊

Excited Mama Goh showing us the stuff she bought to prepare for "过大礼" and our wedding day!

Just came back from accompanying YZ who drove out to buy roti prata supper for Papa Goh. YZ and Papa Goh are on such good terms now it's quite funny. So YZ fell asleep after playing DOTA two nights ago outside my room, and then I was having insomnia last night so I went to small sissy's room to try to fall asleep.

Cos of that, Daddy thought we quarreled and told YZ that we are going to be married soon and have to "give and take" 😂😂😂 So cute one this Papa Goh.

Today, I am feeling thankful for where I am right now, and the ring on my finger, and the man who put it there. I still don't think that there are perfect relationships out there, but I know I've found the man I'm ready to spend the rest of my life with, "through good and bad", "in sickness and in health".

But one thing is for sure:

白永赚, I CHOOSE YOU!" *cue pokeball*

*Wild BYZ appears* ahaha this emoticon so cute and it's white too! 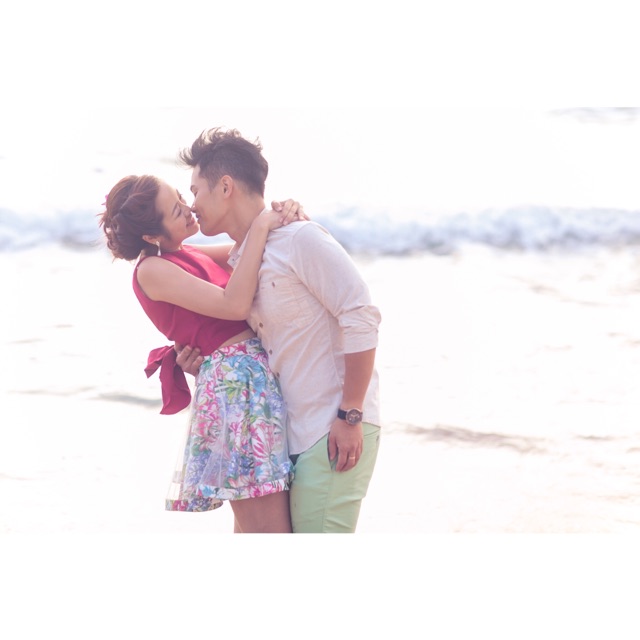 Just got back some photos from the Photoshoot we did in Phuket in May!!!! My favourite one of the lot is this casual outfit picture 😍