My life is a Kdrama!!! Lololol

OMG just came back from 6 hour shooting and it was back-breaking work!!! But before I go into the shoot today, can I share this beautiful video done by Ian of Istudio Motion Pictures?

15 seconds really managed to capture the essence of the past two days, and I love how fun and lively the video is laaaa! 😍

Damn, I need more time. Can someone give me an extra 4 hours in a day? Just for me to update my Dayre lolol.

Anyways I want to share some behind-the-scenes of our photoshoot with Kwedding! I'll probably blog about it in more detail, but here's some random photos and stuff first! ☺️

You'd be surprised (or maybe I'm just suaku) to find out that hair and makeup only starts at 2pm on a typical shoot day, and the shoot itself begins at 6pm!

We were brought to the hair and makeup studio which was H.U.G.E!!!

This is a random display wall in the studio. I mean, it's just so pretty? And there were little touches like this all over the studio, which comprises of two floors, one for hair and one for makeup 😱

I was given a catalogue of hairstyles to look at, but I was lost! I guess a regular bride should do a bit of research beforehand to decide on a few potential hairstyles unlike me, the haphazard bride.

I basically told the hairstylist, a lady called Yang to do whatever she wanted with my hair 😂 Since I had no clue! Just told her I wanted it simple and not too mature or complicated.

PS. No makeup on but selfie camera works its beauty mode magic 👏

After a whole lot of funny looking things were done to my hair (including having my entire head up in rollers ajuma style), this is what the back of my hair looked like.

Do you also realise my hair grew magically longer? Yes.. Hair extensions! You have to top up extra for them so if you have your own or you want to do them in SG, you can prepare that in advance.

Right after hair, we moved on to makeup: while YZ got his turn at hair! I was brought to the next floor with a dedicated makeup space that is just incrediballs. Yes I think I just made up a new word.

I was studiously taking note of which brands were being used on my face too! 😂 Belief skincare products to prep, and even the latest Innisfree water glow bb cushion for a dewy look after my base makeup.

Hair and makeup, all done!!!

To be honest, I wasn't used to my makeup at all! It was a very different style from what I've seen on myself and I was a lil worried I would turn out looking weird on photo.

But everyone else only had good things to say about the makeup and I figured that these Koreans know their stuff, right?

In hindsight, I think the makeup looked fabulous! Really got that Korean wind (韩风) hor? 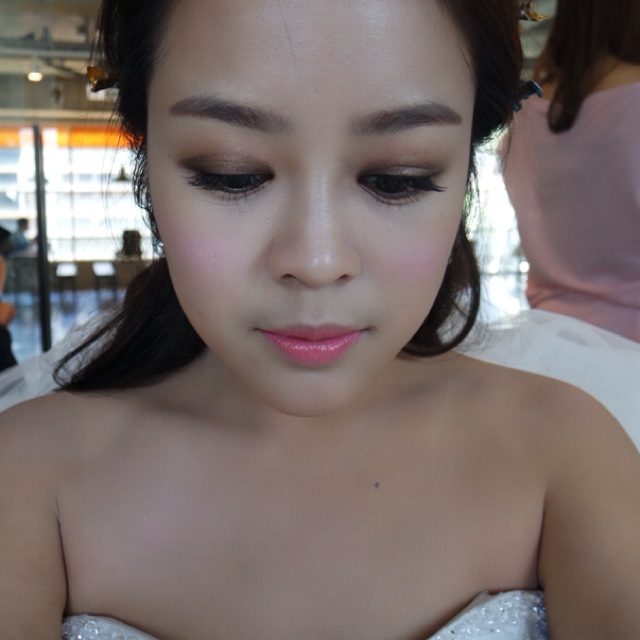 My skin looked perfectly radiant and gorgeous! And the eyeshadow was like smoky and intense but didn't look overdone cos there were no harsh black lines nor dramatic falsies used.

And once we were all done up, it was time for the shoot to begin!

I didn't know what to expect and was still quite worried. I really don't think I'm very photogenic from many angles (my best angle is probably my front view ONLY) and I find it very scary to leave myself in the hands of an unfamiliar photographer.

But once the photographer started doing his thing and the camera got rolling, I just decided to stop worrying about how fat or ugly I looked from whichever angles and just followed the photographer's instructions to pose whichever way he wanted. I mean, wedding photographers are there to make you look good right? And there's always photoshop to save the day 🙈🙈🙈

All these are non-edited images straight orh from my Samsung Nx Mini and you can already see how GORGEOUS the setups are like.

The most amazing part is that everything takes place in just a few small spaces, which magically transforms into different scenes with just a few adjustments from the experienced studio crew! 😱

Another amazing thing is that each gown can be instantly modified to look completely different, just by adding a bolero or off shoulder wrap! This is the same gown as the previous photo, for which an off-shoulder sash was added.

Wahlau seriously these Koreans.. Got so zai one or not??

If you saw this photo I posted on my Instagram.. You'd never guess that this was taken at the studio too? It's like a small rooftop area which has been set-up to look like a garden! 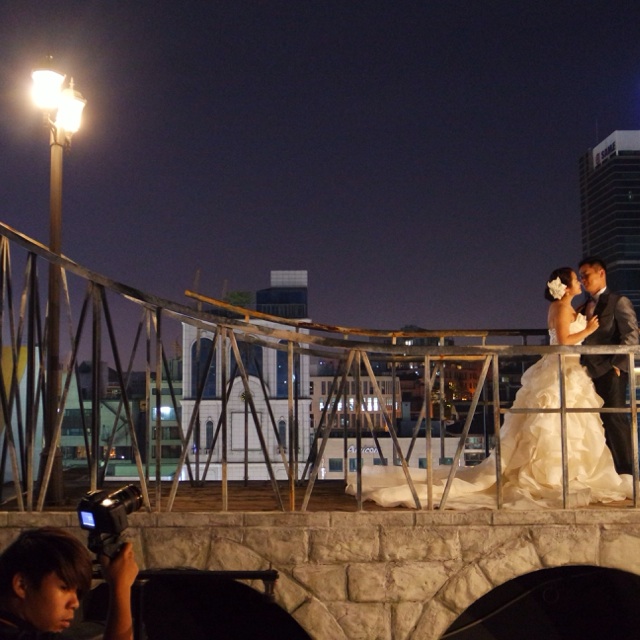 Rooftop k-drama scene…. In the very same space too. Mad!

We also moved into studio and indoor set-ups too, and every single pose and photo was directed by the photographer. It was extremely efficient and if you are very bad at posing, you don't have to worry cos you'd be helped along the way the entire time!

I had lots of solo shots without YZ which felt DAMN awkward but I just decided to werk it and give my best. If they turn out ugly then sua lahhh don't use those shots.

爱心便当 from the Kwedding crew who thoughtfully provided us with bento sets for dinner! The shooting is basically non-stop action and you don't get a break except during scene changes or if you're not in the scene.

Food never tasted so good.. I didn't really feel hungry when on set but when I popped a piece of food into my mouth it was like heaven!

Had some time to surf on my phone during YZ's scene. And this is how ridiculous I looked lol! For the scenes where no shoes can be seen, you'd be given a pair of comfortable white shoes to wear.

Wedding dresses are seriously cumbersome and not made for wearing!

A Korean auntie called "Imonim" (???) will be shadowing you the entire time during the shoot, helping you move in between scenes, changing in and out of your gowns, and even touching up hair and makeup.

This is auntie in action adjusting my pose.. She's super experienced la! At the end of the day, you have to present auntie with an angbao (about $240 sing I think) to thank her for her help during the day.

By the way, my videographers Istudio were shooting their own footage throughout the entire photoshoot too.. They were so tireless and didn't stop until we ended the shoot past midnight!

And they took a selfie with my camera -.- 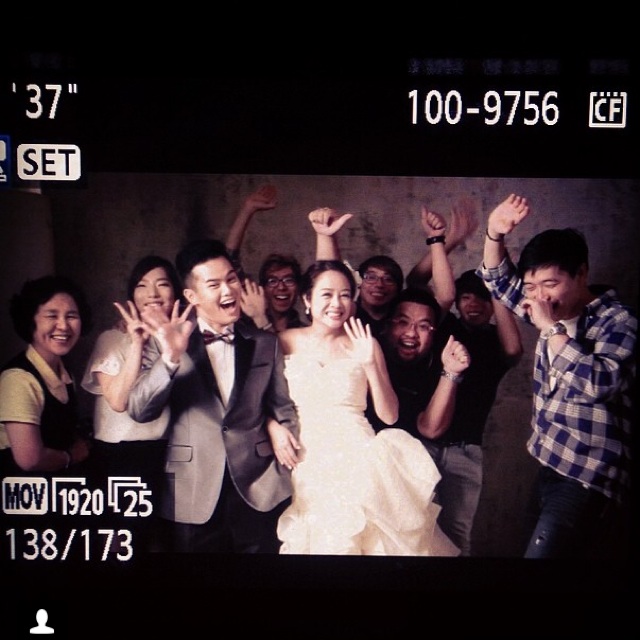 I love this frame that Istudio uploaded on their Insta! Ian just created an Instagram account after my endless prodding so go follow them (@istudio_motion_pictures)! I swear they are the best videography team that I have ever seen and I am really happy that I chose Istudio to shoot for me! 👏👏👏

At the end of every scene, the photographer says.. "辛苦了!" in his Korean-accented Chinese and it is the best thing to hear after standing there stiffly and feeling your jaw muscles about to give way from smiling 😂

And I have to have a special mention for Nicole and Sunny, the two fabulous ladies from Kwedding!

They took SUCH good care of us and were so adorable and fun to have around! The photoshoot is really tiring and towards the end, I couldn't wait for it to be done! But these two kept up their cheerful energy and we were all cracking jokes to keep everyone in high spirits and smiles.

😘 Thank you Nicole and Sunny! 😭 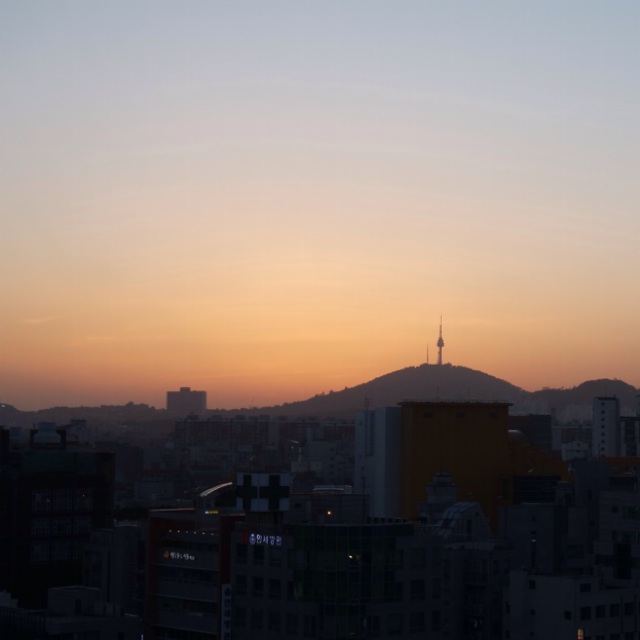 View from the studio rooftop.

Nicole and Sunny not just assisted behind-the-scenes, they were our translators and "nannies" the entire time, helping us translate un-understandable Korean and also arranging so much for us from accommodation to food!

I'm so glad for them!

All in all, it was a marvelous experience and I feel so utterly blessed that everything went so smoothly. YZ and I had so much fun and we are totally in love with the photos that we've seen so far!

To sum it off for my Dayre.. Here's the video I posted on Instagram yesterday: Ian created this video for us overnight! 😭

It was a long day for everybody but so fulfilling! Thank you so much to the team at @k_wedding and @istudio_motion_pictures for the amazing work.. I truly could not ask for anything more for the biggest event of my life, even if my ugly double chin has been captured, it's the real and natural me, and I wouldn't want it any other way. ☺️ THANK YOU!