So I was sitting in YZ's car last night as the radio was playing, and there were two female DJs on air.

So I was at Haji Lane and I saw this boyfriend taking pictures for his girlfriend. But you know what? The girlfriend was LOOKING AWAY.

And then they were inside a cafe and the boyfriend was taking a picture of his girlfriend drinking coffee, but the girlfriend was.. LOOKING AWAY AGAIN.

Then they went back on the streets, and the boyfriend started to take pictures.. Of the girlfriend's backview as she was walking.

The other female DJ said, "Why? Ok what! I think it's cute! He's capturing the moment for her!"

And female DJ 1 replied "It is totally creepy! He should be IN the picture with her, not TAKING the pictures for her! And for what? For Instagram to see!"

But I think it's okay leh! Sometimes you get nice looking artistic act 一个 pictures what! What's wrong? 😕

For instance, @evonnz took this photo for me. And I think it's a very nice act 一个 shot?

So the radio station started to accept call-ins from boyfriends, and the first boyfriend sounded like a jerk man. He was super adamant and rude, saying stuff like "If my girlfriend is like that, I definitely won't do it for her!! For what? She's just a nobody!" Etc etc.

Heng my boyfriend not such a jerk like that. Help girlfriend take nice photos got wrong meh?

YZ was so interested in the topic he turned the radio volume up lol -.- but then they started playing songs after the first call-in so we didn't get to hear the rest of it. 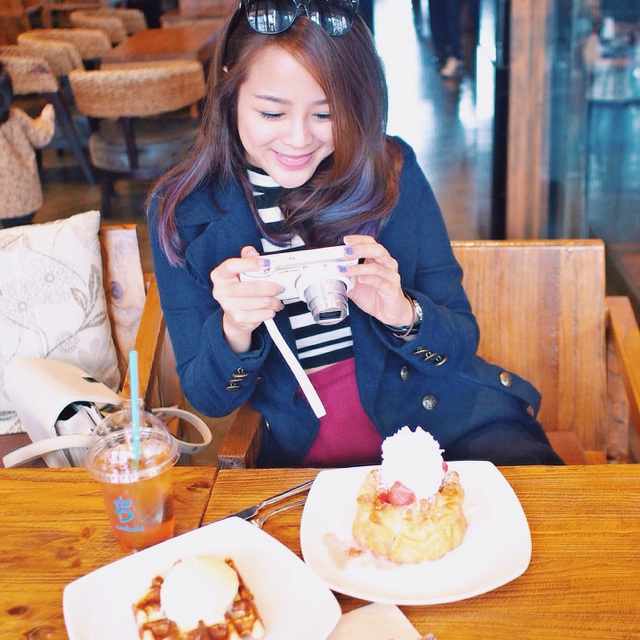 Another act 一个 shot. But I wanted to take a "candid" photo of myself using the Samsung Galaxy Camera 2 mah. So it's like you know "in action" kind of feel.

Sometimes I think Instagram (and other social media) is just a platform for everyone to act 一个. Hahahaha. After all, people can choose to follow or unfollow you mah. If they can't stand you then they unfollow you lor.

Speaking of social media, recently I heard that someone has been trolling me on other ppl's social media platforms.

Damn lame. Get a life, troll. Nice to know someone bothers enough to try to bring me down 👍 At least I don't buy followers to pretend to be more 'popular' than I am.

Back to the radio DJ topic, that guy continued to rant about how he thinks that helping the girlfriend take photos is like helping her to carry her handbag and both are degrading and insulting to the boyfriend (??!)

So different leh. But that guy sounds like a total MCP.

I personally wouldn't ask YZ to carry my handbag for me, but he sometimes helps me with heavy shopping bags and stuff like that. And I think it's sweet when men bother to help their girlfriend or female friends!

See this kitty also pretending to sleep when I'm taking its photo.