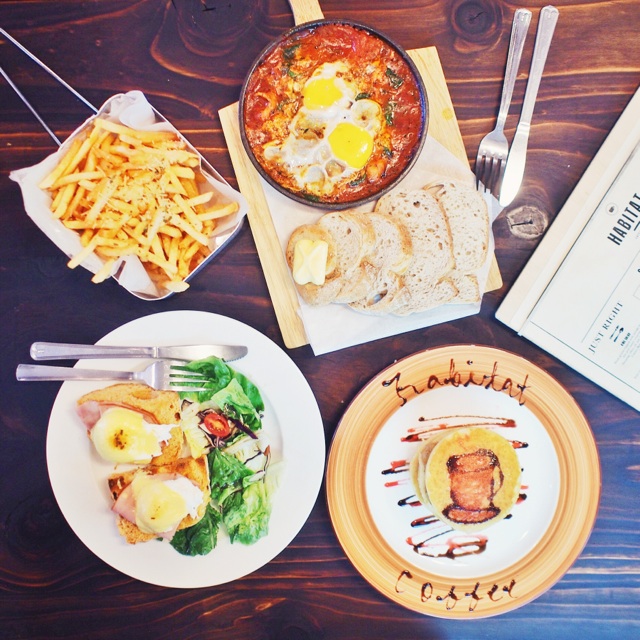 Just gimme brunch food everyday and I will be damn happy. EGGS. HAM. BREAD. Tho I'm not supposed to eat all these but just the EGGS 😻 Can already damn happy liao.

Portion was not very big but that's good too cos too big damn jelat! In general tho their eggs benny is pretty decent for the price.

But I always feel (second time trying this at Habitat) that their fries are too over fried. So it's tad oily and also too hard, don't have that potatoey texture I like anymore..

Macdonalds should totally come out with truffle fries. Confirm win a lot of cafés.

Pancakes were not as fluffy as they were the last time I visited. Ryan (the owner) says they are in the midst of tweaking the recipe…

We are damn greedy. Were full but ordered the Red Velvet Cake. Yum! Could do with slightly more cream cheese but this was tasty!

I forgot to talk about my favourite dish, Eggs Tomato Relish! It is super shiok and hits max savory spot for me! 😻 Baked eggs and tomato and spinach and bacon (?) all together with some sourdough bread om nom nom!

Per pax was about $18, considerably cheap for brunch standards in Singapore!

Something damn weird happened though. I was sitting there waiting for Mong and Mel before they arrived, and this school girl at a table diagonally across from me just freaking turned around and snapped a photo of me.

Maybe she was taking a selfie??!

BUT NO LEH I THINK SHE WAS TAKING A PHOTO OF ME. Yes you. I saw you.

But anyway, if she was really taking a photo of me.. I was too stunned to even react wtf.

And after that I think she sent said photo to a group chat cos I caught a glimpse of her phone screen.

Anyway. Just saying. It was so bizarre I don't know what to make of it.

The two skinny girls who can eat a lot 😂 @mongabong and @melissackoh! So lucky please. I just need to breathe I put on weight liao. We had brunch from 4-6plus and then they went for dinner wtf.

I was so full I didn't eat dinner til late 😧 Had a bit of home cooked veggie soup at 10pm when YZ got to my place.

I am very angry about something that happened and I found out this morning.

But it's too late to channel all the angry energy now so I'll save my rant til tomorrow.

It's not about me actually. But it makes me very indignant and angry! If I feel like it I'll share tomorrow.