I was so excited to wake up today I couldn't sleep well (lol! Probably not just cos of overexcitement, maybe due to my empty stomach too?) and I woke up at like 7am?

Tossed and turned and tried to get back to sleep but my attempts were futile because all I could think about was..

I decided to forget about trying to sleep and sneakily made my way downstairs to my living room/kitchen area.

The first thing I did was to weigh myself, after all, I need to have a record of my ending weight after juice cleanse right?

So I stepped upon the scale with much trepidation…. And….

WHAT IS THIS, DAYRE??!! I weigh exactly the same as I did yesterday! 😔 Not even a microgram lesser. So much for my self-control and abstinence in resisting that Teochew muay yesterday.

I am really blaming it on working out and growing newfound muscles.

But never mind, the most important part is that I made it through 5 days unscathed!!!

Although I know many people 'cheat' when they're doing a juice cleanse and eat small portions of food, I totally didn't and the only other stuff I put in my mouth during these 5 days were half a cup of black soy milk (at event) and two sips of ice blended matcha green tea (yesterday).

So I am pretty proud of myself!

Plus this time I did it all by myself and had to suffer in silence, drooling as I watched YZ eat.

And also I even managed to keep my workout regime consistent throughout the juice cleanse.

Thus I decided results or no I needed to reward myself with something awesome to break my 5 day fast, and I gleefully scanned my refrigerator for food.

I ended up having..

✨Half a bowl of Mummy's yummy fried rice✨

Technically you should be breaking your fast with healthy foods like.. Salads, greens, light soup and etc.

But no guilt at all. Half a bowl of leftover fried rice which I savored with relish.

I think I deserved that 😋

I did exercise restraint though, I had just half a bowl, which is quite a tiny portion. Gotta let my stomach and digestive system accustom to having to work again!

Being able to taste and eat food: Priceless 💴💵💷💶

Rainbows and fireworks in my tastebuds. I slowly tasted and chewed every last morsel of rice.

Satisfied already. And later I am meeting @evonnz for lunch so I am looking forward to it! 😬

Now that the tummy has been indulged and appeased, I think I may be able to get back to sleep for a couple more hours 😋

But I hereby make a promise to do my best to eat as well and as healthily as is possible! A juice cleanse should help to reset your system and it's no use if you go back to unhealthy eating habits straight after a juice cleanse.

In fact, it is said that your body will become more sensitive and attuned to what you eat after a fast, so you need to feed yourself more nutritious food because your body will be absorbing it better!

I think I will weigh myself once a week from now on to keep track, (suggested by reader @biscuit) but I'll try not to be too obsessed with the numbers.

About two months to go before my overseas pre-wed photoshoot so I really hope to look my best! 🙏 I'm quite excited for the pre-wed shoot actually. And worried that I won't look good too >.< Must jiayou!

After that satisfying half a bowl of fried rice, I plonked back into bed for another two hours, just woke up, had feeling to 💩, and thought I should weigh myself again.. Lighter by 0.2kg!! 😱😱😱

#cheapthrill hahaha maybe yesterday didn't poop that's why didn't lose weight ya. Didn't know this 💩 is so heavy one.

So can I take it as officially down 1.6kg after juice cleanse? Yay! 💫💫💫

Feeling so happy to be able to indulge in food again that I kind of overdid it haha but my ABC breakfast was great! Except the bread rolls were super hard, so hard it was almost impossible to break it into two 😰

@evonnz's croissant was nicely crisp and buttery though! And the eggs benny may be an acquired taste because they use Serrano ham (different kind of cured ham) that is quite strong on the tastebuds.

I have quite a few new nom spots to blog about, I need to get down to writing those posts soon!

Anyways, spent today having meetings with different clients and brands, so it was quite a fulfilling/productive day! Ended the last meeting at 6pm and since I was in town area I decided to sit at Smoothie King to get some work done on my laptop, and also ordered a salad from them for dinner.

Today's Insanity workout went easy on us cos it was the 25 minute fit test! This is the test you do on day 1, and you repeat it every two weeks to track your progress. It never gets easier cos you have to challenge yourself to do more reps every time, but there's longer rests in between each exercise and it's not as killer. So we followed up with the Cardio Abs video to get more of a workout in!

Not too bad, considering the first time we did the fit test, it killed us.

YZ is very motivated now that he's seeing results, and he has been preening in front of the mirror like a peacock, lol. At the rate he's going, I think he might just need to marry himself instead of me 🙈

My progress seems to be a lil more lackluster compared to YZ, but I'll still carry on werrrkkkking it! 💪

Confession: My post-workout carbo load was a small portion of Hokkien Prawn Mee that Lina dabao-ed back! Read that the best time to eat carbs is post-workout hehe #acceptablecheat 🙊 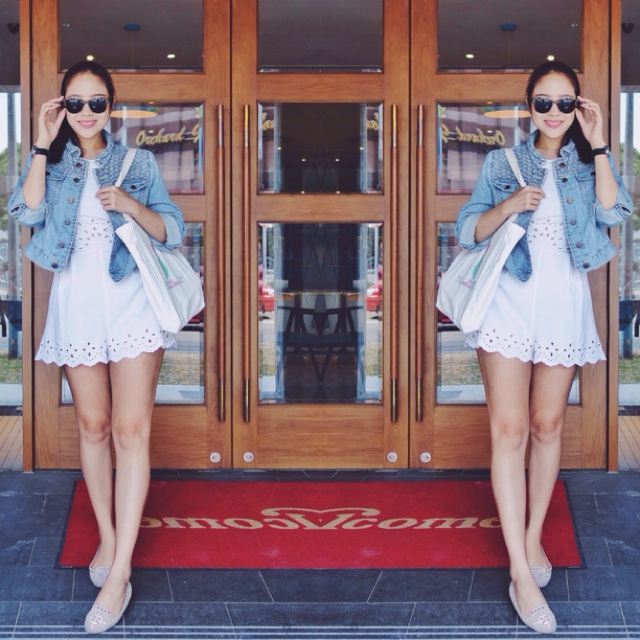 Dressed for comfort today. I love staple wardrobe wear like this denim jacket from Topshop, I bought it 3 years ago and though it was quite pricey ($180?) I've worn it to death and it never goes out of fashion. 👍

Ok I am gonna go and sleep. Wanted to write more but maybe tomorrow! 😴