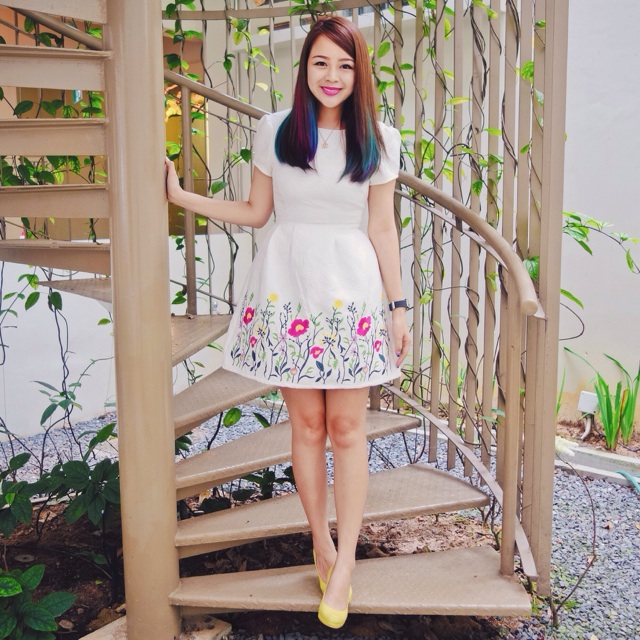 2014 got off to a good start, family lunch with my parents at Old airport road hawker centre though they complained that the food is mediocre, but it's the family time that matters!

And I'm starting off the year with a very awesome first OOTD of #thevelvetdolls upcoming embossed dress with garden embroidery 😍 I should have launched this dress earlier than can back order! Dunno launch next week still can BO in time for CNY or not. Love it!!!

In other news, my little sister is gonna be working for TVD this year & she was horrified yesterday to step into the office cos she says it's a huge mess. Well she's the organized one not me so kudos to you, I'm sure you're gonna do a great job tidying up the office! 😂

I'm really looking forward to settling in properly into the office this year though! It's really still a mess now but I have a vision for the office to be super neat by the time CNY break is over! 💪 *over-confident & positive*

HAHA I am on TV now with YZ!!! On the Best Denki game show 😂 Nice way to start 2014. lol suddenly got bombarded by whatsapps, comments and screenshots from friends and readers that they saw me on tv!

Oh well, if you watched the programme, you'd know that we didn't win in the end, which was a pity! Still got ourselves some vouchers though! ✌️ Thanks to YZ who did a pretty good job!!

So I'm ending the very first day of the new year with this amazing red velvet waffle at a new ice cream joint in Serangoon Gardens called Oblong!

We wanted to get our ice cream fix at Udders actually but it was closed at 11pm, so we went to Oblong instead.

Moral of the story: opening later is always a good idea!

Calories well-spent on this guilty and decadent red velvet waffle.. It was sandwiched with cream cheese that made it absolutely divine!! 😍😍😍 The waffle was crisp on the outside, but still fluffy and light on the inside!

We had it with Sea Salt Caramel ice cream and the combination was so good! Shiokkkkkkkk.